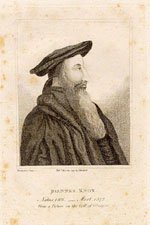 The School is named after John Knox the leader of the Scottish Reformation. He set the severe and rigorous moral tone of the Church of Scotland and shaped its democratic form of government.

A 1929 edition of The Knox Grammarian reported that Mr RW Gillespie Esq and Mr Andrew Reid, Esq had both presented the School with engravings. It is possible the image shown here of John Knox and which are now displayed outside the Headmaster’s office formed part of this early gift.

The people listed below are regarded as the founders of the School. 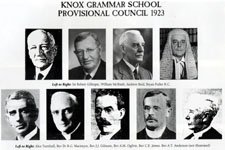 To establish Knox Grammar School, Robert Gillespie (top left) and Andrew Reid (top row, third from left) lent 1,000 pounds each for the deposit on the original property, Earlston. George Gillespie and William McIlrath (top row, second from left) lent 1,000 and 2,000 pounds respectively to convert the property to a School. These monies were later transformed into gifts in favour of the School. Their portraits now hang in the Headmaster's conference room in the main school building. 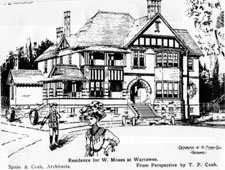 Earlston was known as School House from 1924 until 1947. The first classes and the Preparatory School began in this building. Construction of the Main School Building commenced in 1924 and the building was opened for use in 1925.

It was renamed Gillespie House in 1947 when renovations and the new dining room allowed capacity for a new boarding house. 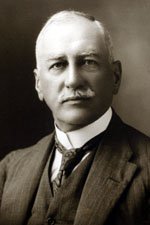 Children of Scottish migrants, the Gillespie brothers established themselves on the North Shore in the late 1890s and early 1900s: John Gillespie at Upton Grey; George at Roseburn in Pibrac Avenue, Warrawee and Robert at Redhall, Wahroonga, which still stands at 4 Illoura Avenue.

Sir Robert's career had included being joint Managing Director of Gillespie Brothers and Anchor Flour mills; Founder and Chairman of the NSW Flour Millers Trade Council and Chairman of the National Export Committee; Chairman and Founder of the many associated flour milling companies.

A staunch Presbyterian in the Scottish tradition, Sir Robert was a director of the Scottish Hospital at Paddington and a generous benefactor. He was also Chairman of PLC Pymble where Gillespie McIlrath House was among his donations. He founded the Presbyterian Church Educational Trust with an initial gift of nine thousand pounds and gave generously to St Andrew's College at Sydney University. He was an active member of the Burnside Presbyterian Orphan homes and a Founder of the Fairbridge Farm School at Molong.

In 1923 Sir Robert Gillespie became the Chairman of the Provisional Council of the North Shore Boys' School which soon became Knox. He served Knox in this capacity until his death in 1945. Together with Andrew Reid, he lent the two thousand pounds deposit for the purchase of Earlston, now Gillespie House. In 1925, he provided funds for the establishment of the Open Scholarship. He gave the original part of the Preparatory School classroom and hall block that was completed in 1936 and in 1938, he arranged the purchase of the Gillespie Fields, then known as Chilton's orchard. 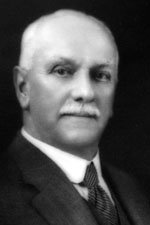 He lacked the flamboyancy of his younger brother, Robert, and his generosity was often unreported. His friend and co-councillor , Professor Sir Samuel Angus, said of him at his death.....

No one ever realised better the moral value of wealth or was more conscientious of his stewardship. ...With that modesty, so unaffected and so characteristic of the man, he gave without ostentation and without display.

By 1931 the School was feeling the effects of the depression and enrolments had started to decline. On 17 June 1931, the Council received a letter stating simply that the sum of 5,000 pounds had been paid into the account of KGS. Council minutes reflect the sentiments referred to by Sir Samuel Angus that, In accordance with the donor's wishes, it was deemed that no publicity be given to the gift at the time.

By 1933 the Armstrong mortgage on Ewan House (what is now the Preparatory School) was due to for repayment and funds were not available. George Gillespie provided the 11 thousand pounds. The survival of the Preparatory School was thus due entirely to a group called Roseburn (the name of his home), consisting of George and his four daughters. It was George who persuaded his sister, Jessie, to donate the funds for the building of the School hospital.

George was Joint Managing Director of Gillespie Brothers, a director of the Royal Exchange Assurance Company and had pastoral interests in Narromine and Armatree. He was a member of the Council of PLC Pymble and a foundation member of Avondale Golf Club. He was responsible for the building of St Margaret's church in Turramurra, named after his mother. The original windows of St Margaret's are now part of the Knox Sanctuary. Of the 17 benefactors on the Benefactors' Roll, eight are Gillespies of which five are from George's own family. 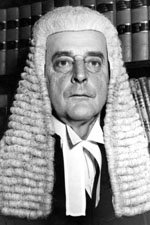 Bryan Fuller was raised on the family property at Dunmore and attended the Scotch College in Melbourne. He later went to St Andrew's College within the University of Sydney and graduated with a BA LLB.

Fuller practised at the NSW Bar and became an Acting District Court Judge prior to World War II. For 20 years he was President of the NSW Lawn Tennis Association, he was Chairman of St Andrew's College Council at the University of Sydney for a record number of terms and Procurator of the Presbyterian Church in the Assembly of the Commonwealth and the New South Wales Assembly. He was President of the University Club for almost 20 years.

In 1923 he was asked by William McIlrath to join the group intending to set up a Presbyterian Boys' School on the North Shore and to provide the legal expertise required for the Provisional Council. Bryan Fuller served on the Council until his appointment as Procurator of the Presbyterian Church in 1945. He served from 1924 as Convenor of the Staff Committee, overseeing appointment of staff from the outset.

His connections with St. Andrew's College led to closer links between that college and the school. During his time as college President, Council resolved to make a scholarship available to boys of Knox Grammar School.

A pedestrian accident on the corner of Philip and Bent Street, Sydney, caused Fuller's death in March 1956. His son, John, attended the School from 1924 -1935 as both a dayboy and boarder. His grandson, Bryan, attended the School as a boarder between 1952 and 1960 and his two great-grandsons, Kim and Andrew, are also now Old Knox Grammarians.

Rev JJ Gilmore BA (back row, second from right) was the minister of the Presbyterian Church at Pymble who had been given the task by the Church of establishing a boys' school on the North Shore.

He was a foundation member of the School Council and held office until the end of 1947 when failing health compelled him to resign. He was born in Ulster, graduated in Dublin and after some years on the staff of a boys' school in Ireland he decided to read for the Church. He came to Australia in the early 20th century, living first in Perth, later in Mittagong and then transferred to Pymble where he served his church well for over twenty years. His interest in the educational field continued and he rendered a splendid service to PLC Pymble while maintaining a close interest in Knox throughout the years. His was a life of grand and useful service and to us and this School will ever remain a monument to his memory.

Alex Turnbull (middle row, far right) was Provisional and Council member 1923-1947. He was an active layman and an associate of the Gillespies who made a successful business career with food merchants Robert Harper & Co. He acted as Convener of the Finance and Works Committee of Council.

His obituary notice in the Knox Grammarian in December 1947 stated, "He was vitally interested in the development of the School and he took an active interest in the cricket, football, athletics and swimming. Although he resigned from Council in June (47) he continued to visit us to see how the boys progressed in games and sports". 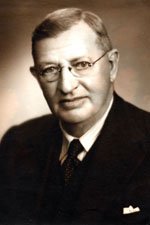 William McIlrath came to Australia from Ulster in 1890, aged about 12. He joined his brothers who developed a large chain of grocery stores that numbered 62 when the company was finally sold to Woolworths on William's death in 1955.

McIlrath was an adventurer, a man of the land, a philanthropist and an Irish Presbyterian. He was a friend of Rev JJ Gilmore, minister at of the Presbyterian Church at Pymble, who had been given the task by the Church of establishing a boys' school on the North Shore. William McIlrath served on the Provisional Council and then on the School Council until his death. 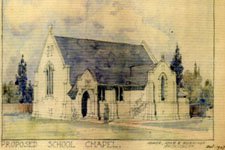 The Chapel had been a long held wish of William McIlrath and drawings for the proposed building dating from 1927 are still to be found among the School Archives.

In 1960 William's widow offered the School 50,000 pounds to build a chapel in memory of the Old Boys killed in WWII. 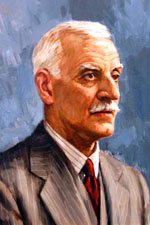 Andrew Reid arrived in Melbourne from Scotland in 1887 and by 1895 was a full partner in James Hardie and Company.

In 1912 his partnership with James Hardie was dissolved and he became sole proprietor of the company. He also had significant pastoral interests and was a major force in the Aberdeen Angus industry.

After the death of his wife, Margaret, in 1934 he gave various gifts in her memory, building the Margaret Reid Home for Crippled Children in St Ives with a gift of nine thousand five hundred pounds, as well as donating ten thousand pounds to an endowment fund for working expenses. He contributed to the setting up of Fairbridge Farm School and gave until he died to the needy of Linlithgow, his hometown.

Together with Robert Gillespie, Andrew Reid lent the deposit of 2,000 pounds for the purchase of Earlston, this loan being later converted to a scholarship fund for the sons of Ministers. His business acumen made Reid a leader in the founding Council and he was a prime mover in the appointment of the first Headmaster, NH MacNeil. He, along with Bryan Fuller, became the closest of the first councillors to the new Headmaster, a friendship that continued until Reid's death in 1939.

In 1933 during the Depression, the School had debts to the Ku-ring-gai Shire. Andrew Reid gave 1,110 pounds to pay off that debt.

He was also responsible for providing the funds for the Handwork Building, its equipment and the first year of teaching. This building was opened on the First Founders Day in 1934. 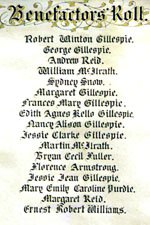 The Benefactor's Roll was first unveiled in 1934 and now hangs in the Headmaster's conference room. Of the 17 benefactors on the Roll, six are founding School Councillors and eight are members of the Gillespie family of which five are from George Gillespie's family.

The 1939 Grammarian report of the second Founders' Day records Ernest Robert Williams, the last name on the roll, as responsible for the grading of the playing field at the Preparatory School and for the completion of the Library (below right) at the Upper School. 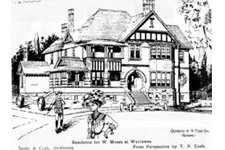 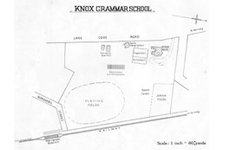 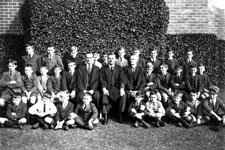 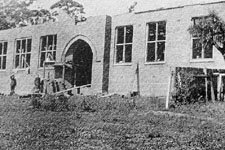 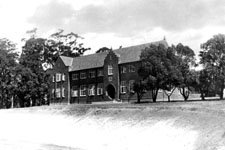 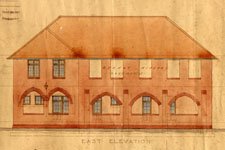 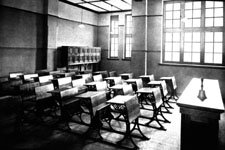 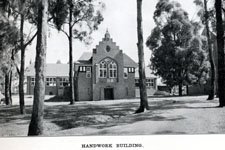 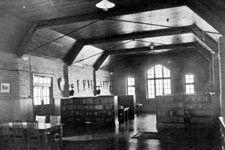 History of Knox:Read a brief history of the School.